News outlets have reported on an Instagram account @TTCWomen, bringing up concerns about women safety and privacy. I’m annoyed by a couple of things: the account, and the lazy and hypocritical media (as well as my photos being used without permission by both sides). 140 characters isn’t enough to vent my frustration, so I wrote a blog post instead.

Give credit where credit is due

I’m annoyed by the creator of the account, Anis Litim, because he uploads photos that do not belong to him; he is not the photographer. How do I know this? Because 4 photos on the account are mine. He removed my copyright information, posted it without my knowledge, and didn’t give proper credit — major annoyances any photographer will tell you. If he asked permission and at the very least tag and credit me, I wouldn’t be upset with him uploading my photos.

Next is the “reporters” at The Star, MetroNews, and GlobalNews, who obviously do not understand basic investigative journalism. Let’s use my photo for example: if you do a simple reverse image search, you come across my Flickr page. You can then send me a message and get more information about the young women in my photographs; investigative journalism 101. Instead, they make assumptions the women are changing on the subway and someone snapped the photos without their consent; all 3 outlets make this assumption.

Most of the photos on the account are posing for the photographs, while the rest are during No Pants Subway Ride, a public event organized by Improv in Toronto. The year I attended the event, all participants and media met at Queens Park prior to getting on the subway to discuss details of the ride. The reason they are not looking at the camera is because the organizers informed the participants to ignore the media and act as if everything is normal. The participants were well aware that media was there, and that they would be photographed. After the event, many people even complained they weren’t photographed enough.

All 3 news outlets could have gathered this information with a bit of research; I just did your jobs for you, you’re welcome.

The 3 media outlets also have the same opinion: the girls didn’t know they were being photographed. You’d think seeing 3 girls in a photo only wearing their underwear would call for more investigation?

The Star: “Toronto-based social and online media consultant Elena Langlois says it’s clear that, in some of the photos, the women aren’t aware they’re on camera.” — wrong.

MetroNews: “‘It looks extremely creepy. They don’t seem to know their photos being taken, and they have no say in whether that’s OK or not,’ said Sabera Esufali, a peer support co-ordinator at the Centre for Women and Trans People at the University of Toronto.” — wrong again.

GlobalNews: “Filled with shots of women riding Toronto’s transit system, some pictures appear posed, while others look like candid shots.” — Ok you’re kind of right, but still wrong; they are candid for a reason.

The photos where the women are looking at the camera, my guess was a selfie or a friend taking the photo, and this Anis Litim guy finding the photo on social media and uploading it to this account; that part is definitely a little creepy.

Is it not a little hypocritical GlobalNews uses a photo in their video segment without permission, from myself or the girl in the photo, yet cry about permission and photo law throughout? 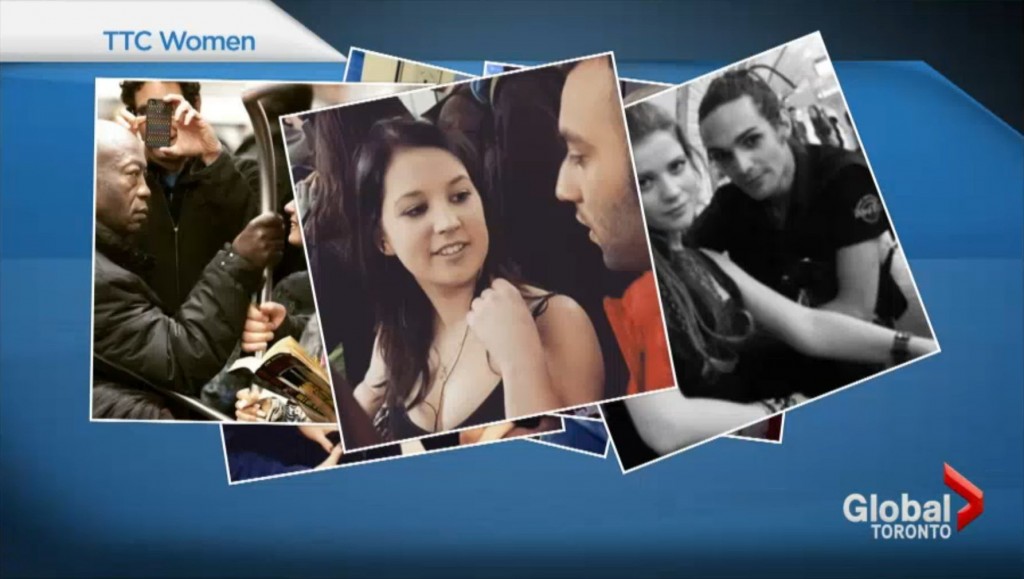 I got in touch with Jacqueline Crawford, the girl included in the video segment. She had this to say:

I am amused and almost annoyed by GlobalNews at their failure to do their homework on the photos presented by TTCWomen on Instagram. Being one of those whose photo was taken and posted I can say that most of those photos had permission to be taken as it was for the No Pants Subway Ride (of which you can note by the lack of pants in some photos-although mine is only the upper portion) When they stated that some people were looking at the camera and some were not they failed to understand that it was the intention for the photos. As most are familiar with the No Pants Subway Ride, you know that you’re suppose to act natural and as the photographers say, act like were not even there. Had they done their homework they’d know this. I’m also amused that this segment talks about respect and privacy. Yet no one made any attempt to contact me for the usage of my photo used in a video that I do not support without my permission that has also become more viral than the photos themselves. I gave permission for my photo to be taken…but I did not give GlobalNews the permission to use it. –Jacqueline Crawford

Hey guess what GlobalNews, I asked for permission to use this comment and her name in this blog post. It wasn’t a lot of work and it only took a few seconds to ask, try it next time.

The media also mentioned privacy. Sorry to say, but being on public property you essentially give up any expectation of privacy.

“Just because I’m standing in public as a private person doesn’t give someone the right to take a photo of me and share it on social media,” [Elena Langlois] says.

Sharing it on social media we can have a conversation, but sorry to say, they have every right to take that photo; whether they can sell that photo for commercial use is another story.

In a perfect world, he would take the photos himself and ask permission from the girl after taking the photo. While I’m not 100% on board with the account, what he is doing is technically not breaking any laws.

The law is clear*

*I’m not a lawyer

Photography on TTC property: “3.17 No person shall operate any camera, video recording device, movie camera or any similar device for commercial purposes upon the transit system without authorization.” There is no mention to non-commercial or artistic photography.

That is why you constantly see tv reporters on TTC property covering a story, they have every right to do so.

Canadian Charter of Rights and Freedoms: “freedom of thought, belief, opinion and expression, including freedom of the press and other media of communication”

Constable in the GlobalNews article video: “You can kindly ask them to please not take the photograph and to delete it from their phone,” said Const. Jenifferjit Sidhu. “However, it’s not a criminal offence.”

I am curious if an account focused on TTC men would raise the same concerns. @TTCWomen was inspired by @hotdudesreading and those are all clearly taken without consent. Granted non of the guys are in their underwear, but there doesn’t seem as much talk about privacy or safety about that account. If you want a discussion about photo privacy it must include everybody, not just women.

To sum up: Photography is a tricky medium, one that needs to be examined constantly, that’s obvious. But let’s not forget, it’s an expression of our thoughts and freedoms, and that is something which I enjoy about this country.

“Those who surrender freedom for security will not have, nor do they deserve, either one.” –Benjamin Franklin

The idea of uploading photos of women without their consent troubles me a little, but it’s not the worst thing out there. If he took the photos himself and asked the woman if he could upload them, I would have his back without hesitation. But at least there’s this: “Litim says he’d also like to post the names and Instagram handles of women who consent to having their photos taken so they can be part of the conversation.”

What do you think? Is the account in the right or wrong? Is the media over-hyping this? Are there expectations of privacy in public spaces? Share your thoughts below.

PS, I might edit this in the future, I just wanted to get my thoughts out quickly.